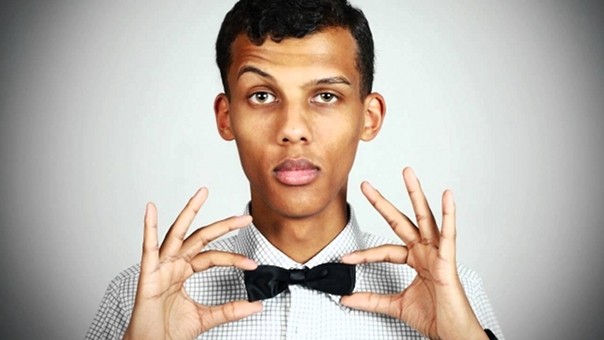 After Greece, I felt compelled to travel -musically speaking- to Belgium, moved by the recent tragic events… When thinking Belgium, one artist comes straight away to my mind: Stromae.

Many of you may wonder, Who the hell is Stromae?

Stromae poster on a wall in Austin, Texas

If you live in Europe, chances are that you have already heard -and danced- one of his absolute hits: Alors on dance, which in 2010 topped the charts of most European countries. His fame though, has now largely exceeded the European borders: in a recent tour he managed to take the USA by storm.

But Stromae -his name comes from reversing the syllables of Maestro–  is also a YouTube superstar: his videos have one billion views!!

So, what’s the secret of success, particularly for someone who sings only in French? His melodious tunes? The meaningful lyrics? His enigmatic look? The answer is: all of them!

Although his songs are influenced by electronic and hip hop music, they are not confined to these two genres: some songs have african, other latin sounds, blended harmonically together. But what makes him excel above other artists is that, under the easy-listening rhythms, a powerful social message is hidden: he tells stories about AIDS, cancer, relationships, sexual clichés… Yet Stromae believes that understanding the lyrics is not that important: “Nobody understands English music [in Belgium], but everybody listens to English music, so we can understand the feeling, understand the groove, and it’s enough actually to dance on it or to feel”, he says.

Stromae’s eccentric look has certainly been instrumental for his wide recognition: the exotic racial features, dark skin and green eyes -his father was from Rwanda, his mother is Belgian- as well as his expressive, melancholic regard. And of course his signature, equally exotic dressing style: a blend of British elegance and African aesthetic.

Thus, maybe the secret of success is that Stromae is a symbol of Europe: a mixture of races, styles, and cultures; exhaling a great deal of contradiction and provocation; with utmost attention to aesthetics; weightless but socially engaged at the same time… 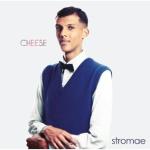 Stromae’s first hit came almost by chance: while working as a trainee at a Belgian radio station, the music manager heard “Alors on dance” and decided to air it. The success was immediate. The song’s catchy beats deliver a message: “Life sucks, so we dance”, which came out in the right place, the right time: at the beginning of Europe’s economic crisis back in 2009. The video shows a guy feeling hopeless about his life and society, so the only thing left is to dance.

His first album, Cheese, was released in 2010; besides the smash hit “Alors on Dance” we find other nice tracks; maybe my favourite is “Te quiero”.

His masterful second album, Racine Carrée (Square Root), is musically more diverse and accomplished, while preserving the relevant lyrics. Released in 2013, it contains many wonderful songs, most of which have reached number 1 in France’s and Belgium’s charts. It is difficult -if not impossible- to pick a single song from this album; these are some of my preferred ones:

“Papaoutai” (“Papa où t’ai/Papa where are you”) talks about absent fathers -Stromae’s own father was killed during the Rwandan genocide, and he grew up with his widow mother. In the colourful, visually  impeccable video -with more than 300 million views!- a boy uses a mannequin to replace his absent father:

“Formidable”, a story about a drunk homeless, went viral on YouTube: to make the video, he used hidden cameras at a tram stop and pretended to be drunk.

“Tous Les Mêmes” (“All the same”) features Stromae dressed half a man, half a woman, and depicts various stereotypes on gender differences.

“Quand C’est?” (When is it?; in French sounds like “Cancer”) is Stromae’s latest artful, dark video, where he “explores the pain caused and inevitable fear of cancer”:

One thought on “STROMAE”